Hoodoos, Arches, and Canyons: How These Famous Natural Landmarks Were Formed

Our country’s national parks protect a variety of natural features, some of which aren’t found or aren’t found in that concentration, anywhere else in the world.

Some of those features include rock formations.

From the towering canyon walls of Zion National Park to the graceful arches in Arches National Park, the Southwest is home to some stunning rock formations, many of which are carefully protected in national parks.

Planning a visit to see a few formations for yourself? Keep reading to learn how they were formed, and where you can see them.

Hoodoos are perhaps the least well-known of the formations on this list. But while they may be rarer, there are clusters of these formations found in countries all over the world.

The hoodoos in Drumheller, Canada are some of the most photographed icons of Alberta. In the Canary Islands, hoodoos make an appearance in the beautiful Teide National Park, which is also home to the third-largest volcanic structure in the world.

But Southern Utah is home to the largest collection of hoodoos found anywhere on the planet. And you’ll find them in Bryce Canyon National Park.

How are Hoodoos Formed?

Hoodoos are formed through a 3-step process that takes thousands of years to complete. The first step involves rocks deposited on the bottom of a lake or floodplain. Around 50 million years ago, an ancient lake sat in what is now a part of the national park. Runoff from slopes around the lake led to deposits of limestone, mudstones, and other rocks at the bottom of the body of water.

These deposited rocks and sediment accumulated and became cemented together. In the next step, shifting tectonic plates lifted up these layers of cemented rock, forming ridges and mountains.

The final step in the formation of hoodoos involves thousands of years of erosion and weather from wind, rain, and ice. Water made its way into the rocks, freezing overnight and thawing during the day. This process often led to arches first, which then collapsed, leaving behind pillars that we now call hoodoos.

The best place to see these hoodoos is from viewpoints around Bryce Canyon’s natural amphitheater.

If you’re dreaming of standing beneath an awe-inspiring natural arch, there’s no better place to visit than Arches National Park. This park is home to more than 2,000 natural stone archways — the densest concentration found anywhere in the world.

How are Arches Formed?

The arches in this popular national park began their journey some 65 million years ago. Much like Bryce’s hoodoos, these rock formations got their start at the bottom of a seabed, which by this time had dried up, leaving a layer of sandstone at the bottom.

Shifting geologic forces caused the earth’s surface to wrinkle and fold, burying the sandstone underneath other layers of rock. The region then began to rise, climbing thousands of feet in elevation. Erosion then began to wear away these raised layers. This exposed those buried layers of sandstone, which expanded and fractured, allowing water to seep in.

The effects of water and erosion wore away the sandstone and created the arches we see today.

Of course, it’s important to remember that these same processes are still occurring today, and erosion continues. This means that smaller arches continue to grow, and larger arches are at risk of collapse if erosion wears the pillars too thin. This occurred in 2008 when the Wall Arch came tumbling down. 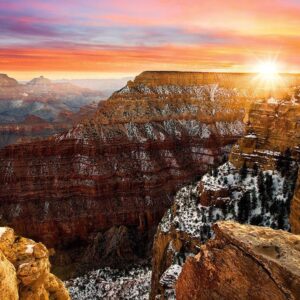 How are Canyons Formed?

Canyons are a very different type of formation, compared to hoodoos and arches. However, much like the formations we’ve already covered, they too are formed by the forces of water and erosion.

In the case of canyons, rivers are often to blame. The force of the water’s flow slowly erodes the rock beneath it. Shifting pathways of that river create the curving, deep canyons that are found all over the world.

However, not all canyons are formed as the result of rivers. Slot canyons, such as the famous slot canyon of Antelope Canyon, form as a result of weathering and erosion of sandstone.

You’ll find canyons all over the Southwest United States. If you want to see two distinct kinds of canyons, a river-formed canyon and a slot canyon, our Wonders of the West 10 Day Scheduled Tour is a great choice. You’ll get to not only see Grand Canyon National Park but will also have a chance to climb into the famous Antelope Canyon, a stunning slot canyon.

Plan a Visit to See These Landmarks for Yourself

Whether you’re dreaming of gazing up a towering hoodoo or snapping the perfect sunset pic through a sweeping arch, it’s time to plan your own visit to see these incredible natural landmarks.

You’ll see all three formations on our Wonders of the West Tour. On this adventure, you’ll enjoy days of hiking and sightseeing in Arches National Park, Bryce Canyon National Park, the Grand Canyon, and Antelope Canyon.

Spots are filling up fast for our tours. Book your spot today by reaching out directly at (435) 940-4212 or through your local travel agent. Start planning your vacation today to guarantee your choice of trips and dates.

Take the Rustic and Rugged out of national park touring! Choose from our popular small group or private custom tours to explore and visit the Mighty 5 national parks in Utah: Arches, Canyonlands, Capitol Reef, Bryce Canyon, and Zion.

We also feature tours to Yellowstone, Grand Tetons, and the Grand Canyon. Our professional guides will use their vast knowledge of the national parks – geology, history, trails, and activities for all ability levels – to personalize your tour experience. Our luxury vehicles will ensure you are transported in comfort and style. Sign up today!